UAE Economy To Grow Steadily In Next 5 Years 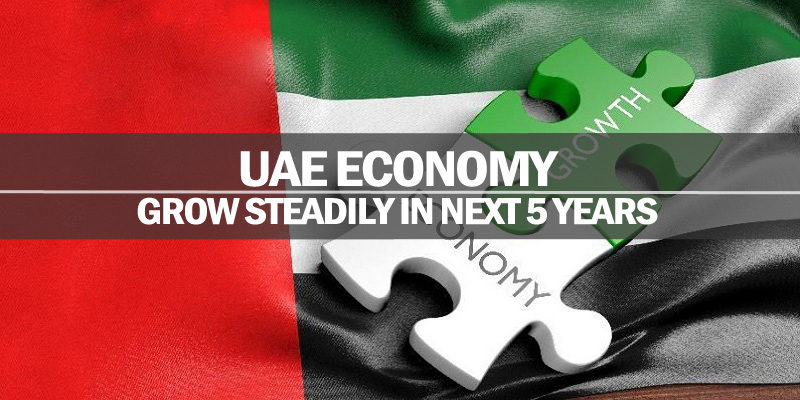 Negative impacts of 2014 oil crisis were seen in all the oil-based economies especially those located in the Middle East. This situation forced these affected countries to think something out of the box and take few special measures according to the gravity of this alarming situation. UAE was on the top of this initiative as it (along with Saudi Arabia) implemented VAT (value added tax) and few other taxes for the first time and also move forward rapidly to alter basis of economy with emphasis on sources other than oil.

Main purpose of such steps is to relieve the country from unreliable international prices of fossil fuels. In few initial years of this crisis, UAE understandably struggled to maintain its economic growth. But vital and far-reaching steps are proving fruitful for country’s economy and there are reports for returning of UAE’s economy to growth. A previous report stated that UAE is now recovering from financial crisis.

Apart from that, it is also reported that UAE has started to attain its growth in 2017 when it first time recorded economic growth of 0.8% after oil crisis. Latest reports by formidable organizations are also quite satisfactory for future of UAE’s economic growth. A latest report by IMF (International Monetary Fund) has also indicated that the country’s economy will grow by 3% in the upcoming 5 years.

According to details, IMF predicts that UAE’s economy will grow by 3% in next year until 2023. It is expected that UAE’s GDP (gross domestic product) will increase from AED 1.51 billion in 2018 to AED 1.89 billion by 2023. The increase in GDP in constant price is expected during same period is from AED 1.43 trillion to AED 1.66 trillion. The international body also stated that inflation of Gulf country will remain steady in the next five years with average of around 2.2%.

These reports and analysis by IMF and other international organizations are important as they are unbiased and based on statistics and proper knowledge. These reports clearly paint an encouraging picture for UAE’s future economy. It means the situation is best for companies to setup their businesses in UAE in order to gain maximum benefits.

Opportunities for business setup are available in both mainland and several free zones in all the emirates of UAE. For further inquiry and practical assistance about the matter, you can contact Riz & Mona Consultancy via our WhatsApp # 971-56-9971225 or landline # 971-4-5586339.
Source: Zawya