Evolution in Entrepreneurial Trends with the Times 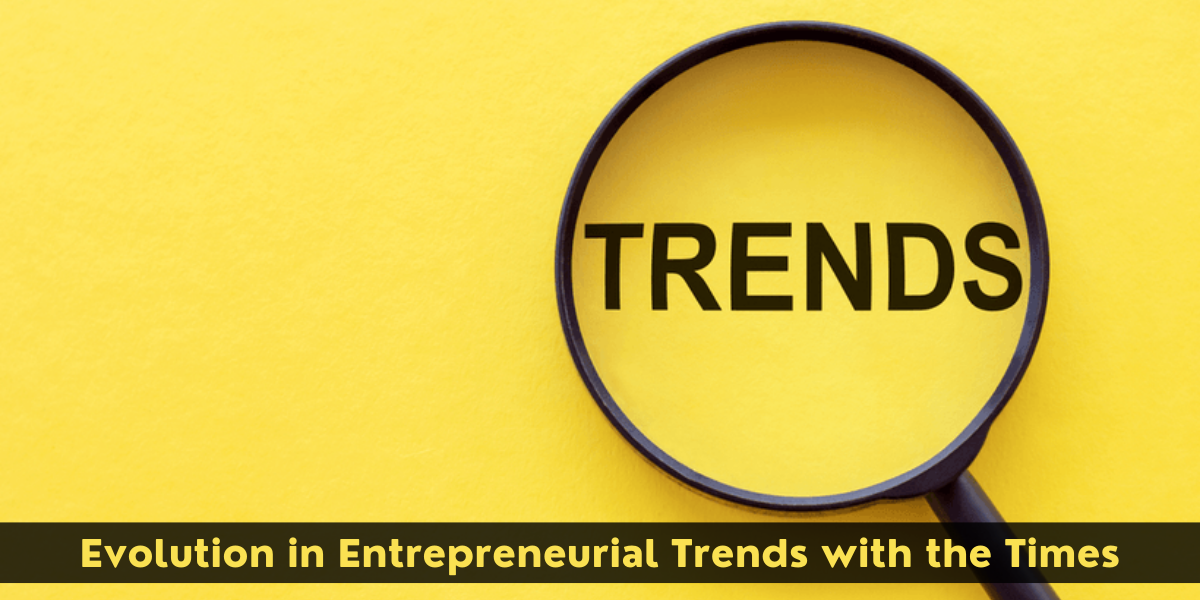 It is the law of existence that over time all changes. Wise people are those who forecast, plan, and respond to the situation. Entrepreneurship is no different from that. The world has made a rapid change, particularly in the last 50 years, and so is the sense of entrepreneurship. What founders thought today will be somewhat different from those of the 1950s.

The idea of entrepreneurship has evolved significantly over the last two centuries. The crucial truth remains that entrepreneurship is on the rise. Let us look at the causes for this surge and evaluate the aspects that today’s entrepreneur feels they are in comparison to their predecessors.

The real term ‘entrepreneur’ is derived from the French term meaning ‘to undertake’- entrependre. An entrepreneur is an economic agent who,

This concept, though limited but familiar as a cost-cutting tactic or redistribution of economic capital, is widely observed by companies today.

Today, Entrepreneurship is defined as;

“Entrepreneurship is the pursuit of opportunity without regard to resources currently controlled.”

This ensures that an entrepreneur can find a market opportunity even though he does not have the ensures to do so. It is not a matter of using the available resources to produce a commodity, but rather of creating a goal of manufacturing something and then focusing on means of accessing the necessary resources.

What has changed? Well, a lot when it comes to the face of modern company operations. What’s interesting is that almost all of the improvements described below are rooted in remarkable global advances in technology and culture.

Information technology was one of the most significant, if not the most important, social, and economic forces over the last half-century. Many more ‘orthodox’ nations have become much more economically democratic and open to free exchange. This is particularly the case for the UAE. As the best-ranked Middle East ‘business-friendly’ region, according to the World Bank Group, it already offers a comparatively low-tax atmosphere before even less stringent free zones are taken into account. The rewards to businesses have been shocking.

Although industrial production has already been in a steady decline in developed nations, technological creativity has advanced to fill the gap. According to the MENA Investment Study 2017, tech firms (e-commerce, software, and technology) in the UAE accounted for 29 percent of new enterprises. They became a distinct community in the 1950s. Even if an organization isn’t a software pioneer, it’s likely to be using developments such as social media, websites, and apps.

Approximately 20,000 years ago, entrepreneurship began with commerce. Goods were traded amongst humans for the gain of the tribe as a whole. Now trade is very easy and accessible as transportation and sources of exchange have evolved.

One of the causes, why entrepreneurs may start to be younger, is the increase in entrepreneurship schooling. Universities are now cranking out individuals with the expertise and experience required to hit the ground running. Such programs are no longer exclusive to the USA and Europe, with institutions in the UAE, such as NYU Abu Dhabi and the Dubai Entrepreneurs Academy, providing business courses and the growth of professions. For those who do not have the ability to attend such a prestigious course still have access to education through self-learning, such as free online classes or YouTube videos. Entrepreneurship is no more the world of people with brilliant ideas and aspirations, but of people with bright ideas and oriented boot lessons.

Technology now ensures that it is possible to operate from anywhere, at a great pace, and on a wide scale. You don’t really have to work where the money is, and you don’t even have to waste your day banging on the doors. The internet has been the secret to this. Big companies are widening their workforce to include and benefit from start-ups in smaller developed nations. Research by Willis Towers Watson, the risk management and insurance consulting company, found that 54 percent of businesses worldwide are planning to adjust how they handle their employees and employ more foreign contractors over the next three years.

Nowadays, we will see more women take care of new startups. Global Entrepreneurship Research Association announced that there are currently several countries, such as the UAE and Qatar, where women have equivalent or higher rates of entrepreneurship than males. Entrepreneurship also has differed in terms of generation. Minority-owned companies are now on the rise. A lot of younger founders are starting out at a young age.

There are individuals who are no longer motivated by profit, but rather want to create the business empire that is socially responsible and contributes something to society. They’re called ethical entrepreneurs. An example will be TOM, a shoe shop that has a ‘one for one’ scheme, i.e. when you purchase one pair of shoes, another one is provided to a person in need.

The Target of Modern-Day Entrepreneurship

Some aspects, however, certainly haven’t changed when it comes to entrepreneurs. We need the desire to solve challenges, to display ingenuity and inventiveness. There’s the creative spirit too: qualities like concentration and tenacity – things that obviously can’t be learned in any classroom. Without them, the startups will never get off the ground. And there’s the desire to face adversity and loss without giving in. To persist or step fast when things go wrong, as they often do. Entrepreneurs do require outstanding managerial skills as well. Capacity to prepare, make fast decisions, inspire, and execute, as well as sell and fund efficiently.

Entrepreneurship will continue to retain its distinctive place in culture and the market. Just the methods of entrepreneurship have changed over the year, not the foundation. Entrepreneurs meet demand by supplying material. They are the visionaries who solve the issues that nobody has solved before. Today’s global economy, including state-of-the-art technology, connectivity networks, inexpensive labor, and means of production, has made new entrepreneurship daunting but satisfying. Good founders will be those who have the potential to lead, fix challenges, demonstrate ingenuity, shift over time, and never give up.