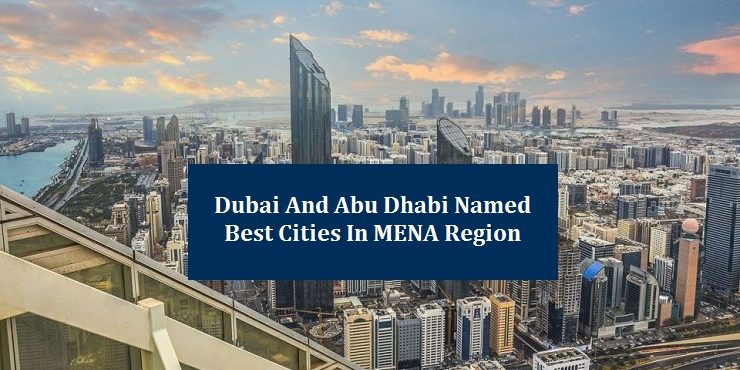 A recent survey by a global online market research company and a leading job site shows that Dubai and Abu Dhabi are ranked as the top cities in MENA (Middle East and North Africa) region by living and working standards. Both the Emirati cities remained on top for almost all the factors included in the survey. The survey was conducted from 6th September 2017 to 2nd October 2017 during which the opinion of 5,114 residents of different cities of MENA region was taken. Apart from Abu Dhabi and Dubai, the other cities that were part of this survey include Sharjah, Riydh, Jeddah, Kuwait City, Cairo, Amman, Marrakech, Muscat, Manama, Damascus, Algiers and others.

According to details, the survey was conducted by YouGov and Bayt.com. The factors included in the survey were socio-culture factors, entrepreneurship factors, economic factors and standards of living. In overall scenario, more than 75% residents of both the cities told that they are feeling happy while residing in their cities.

Among the socio-cultural factors, Dubai and Abu Dhabi were leading in the topics of low crime rate, effective law enforcement and fair treatment of all the nationalities. All these sub factors were considered as most importance in the survey.

The most important points for the sports, culture and recreation factors were: family-friendly activities, sports & outdoor activities, and availability of natural areas and relaxation facilities. Abu Dhabi and Dubai remained top for these factors also.

Among the environmental sectors included in the survey, the residents of MENA cities gave most importance to clean water, clean air and clean streets. Both the Emirati cities remained on top in these factors also and more than 90% residents declared the performance of Abu Dhabi and Dubai in cleanliness of streets as ‘excellent’ or ‘good’.

Dubai and Abu Dhabi were ranked at the top on all the important factors related to entrepreneurship. The most important factors in this aspect were affordability of fees & taxes, acceptance of innovations & new ideas by market and starting a business after easily finding finances.

On the question of labor rites, most important factors were health insurance & social security systems, system benefits, wage protection and termination rights. Most of the respondents from Dubai and Abu Dhabi were of favorable view regarding these labor rites.

Security, education quality and availability of healthcare facilities were most important factors for standard of living as regarded by respondent of MENA region. Abu Dhabi and Dubai topped in all these factors among all the other cities of MENA.

The only factor where performance of Dubai and Abu Dhabi was slightly sluggish was the availability of jobs in these cities. The performance was given ‘excellent’ and ‘good’ by just over 40% people while around 35% declared the performance as ‘average’.