You are here:
InternationalNews 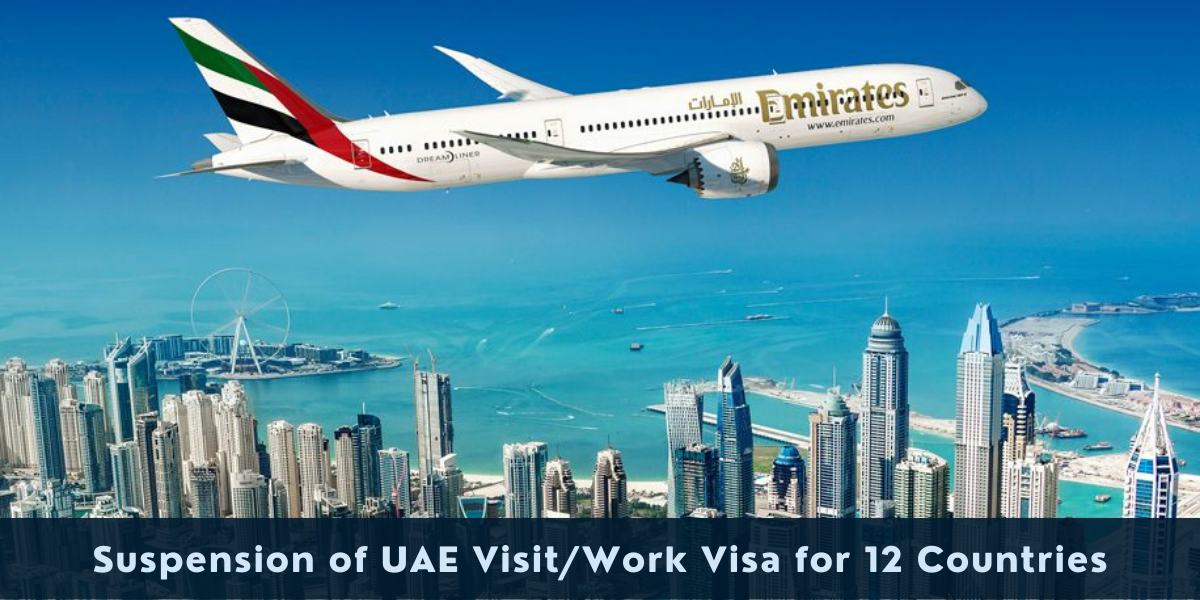 Until further notice, the United Arab Emirates (UAE) has temporarily suspended the issuance of new visas for tourists from Pakistan and 11 other nations. On 18 November, Pakistan’s Foreign Office reported the news that the UAE authorities’ decision is assumed to be tied to the second wave of Covid-19.’ However, on already approved visas, the suspension does not occur. As the UAE has different visa categories, including business, travel, transit and students, it is not known how many categories of visas will be impacted by the suspension. Other countries affected by new visa directives from the UAE government are, among others, Turkey, Iran, Yemen, Syria, Iraq, Somalia, Libya, Kenya and Afghanistan.

Amendments in the Entry Criteria for Visit Visa

Hundreds of Pakistani passengers were refused entry into the UAE last month and repatriated after they were unable to fulfil the latest entry requirements established by the visiting visa holders’ authorities. In the second week of October, the Dubai authorities made it mandatory for all visitors to have AED2,000 currency, return air tickets and hotel bookings to reach the country. It was important to include correct residential address and ‘other appropriate’ details regarding their hosts for those visitors intending to stay with friends and relatives. On Oct. 17, the Consulate General of Pakistan in Dubai reported that a total of 678 Pakistani nationals were refused admission into the UAE for failing to comply with the requirements.

In addition, on 20 November, following the suspension of visit and work visas for twelve nations, including Pakistan, Turkey, Iran, etc., the UAE declared the expansion of its “golden” visa scheme to some specialists, specialized degree holders and others, granting 10 years of residence in the Gulf State. In the UAE, foreigners typically have renewable visas that are only valid for a few years, linked to jobs. Over the last two years, the government has made its visa program more stable, giving some categories of investors, students and professionals longer residencies.

According to a credible source, owing to security issues, the UAE has temporarily stopped granting new visas to Afghans, Pakistanis and residents of many other nations. The source did not specify what those issues were but said it was predicted that the visa moratorium would continue for a brief time. The Ministry of Foreign Affairs of Pakistan said last week that the UAE had stopped processing new visas for its residents and those of some other nations. The Foreign Office reported that it was seeking UAE details about the explanation for the suspension but that it suspected it was linked to the pandemic of the coronavirus. Those holding valid visas were not impacted by the new restrictions and could access the UAE, said the Pakistani ministry and the source.

Possible Causes and Implications of Suspension of Visas

Turkey-UAE ties have been strained after the political crisis in Qatar in June 2017, when diplomatic relations with Turkey’s partner Qatar were broken by Saudi Arabia, the United Arab Emirates, Bahrain and Egypt. Turkey attempted to suspend diplomatic links with the UAE in August and to withdraw its ambassador, the day after the nation declared that it would become the third Arab country to have full contact with Israel.

We, at Riz and Mona Consultancy, sincerely hope this suspension is revoked soon. For further queries related to visas, company formation, and any other expert consultation related to your business, contact us today!

Sharjah and Ajman to Provide 100% Ownership to Foreign Investors
June 4, 2021
GET FREE CONSULTATION