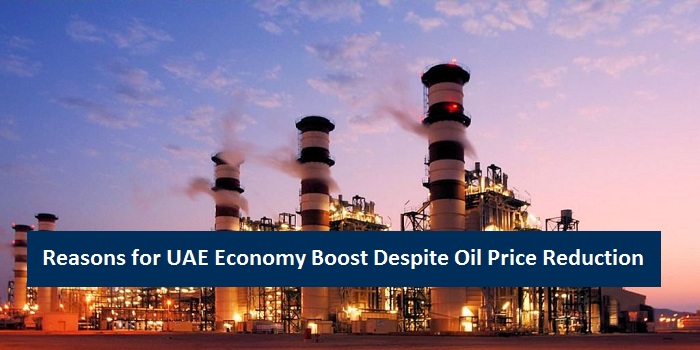 Most of the gulf countries developed their infrastructure and provided high life standard to their people using their oil and petroleum exports. But the continuous reduction in oil and petroleum prices since 2014 badly affected these oil and petroleum based economies. Most of these Gulf States had to decrease their incentives provided to people, expelled large number of expatriates from their countries and imposed previously relaxed taxes on locals and foreigners.

But not all countries suffer the same fate. UAE is a country in the gulf region that managed to keep itself away from the severe crisis of this recent oil price slump. An important reason for UAE to be affected less by this problem is their diverse economy. UAE relies less on oil and petroleum export as compared to most of its neighboring countries. Following are few of the most important reasons that UAE remained economically strong despite the current oil and petroleum price crisis.

Tourism is an important industry in several of the UAE states. Dubai, Abu Dhabi and Sharjah are the states that rely mostly on tourism and foreign visitors. Dubai is known as the ‘shopping capital of the Middle East’ as it provides immense opportunities for shopping of local and imported products. International brands from all around the world have set up their centers in UAE that provides world class shopping experience to tourists and local people.

UAE also has a rich cultural heritage that attracts visitors from all around the world. Dubai Museum and the Village of Hatta in Dubai, Abu Dhabi History Museum and Aquarium in Abu Dhabi, and Sharjah Fort and several types of museums in Sharjah are few examples of the frequency of cultural heritage sites in UAE that provide great attractions to foreign tourists.

UAE is also known for hosting international sports events. These events also attract many sports lovers from all around the world which is an important part of tourism in UAE. In 2013, around 10 million tourists visit Dubai only.

UAE is known for world class infrastructure including high rise buildings, wide roads, large ports and world renowned airports and aviation industry. Billions of dollars have been invested in building of infrastructure in Dubai and the trend is growing faster. All the seven states of UAE are linked by road network while rail network of Dubai Metro is the first of its type in the GCC countries.
UAE is home to two world’s famous airlines, Emirates and Etihad, while the country has 7 international airports that receive flights from around the world. The construction of ‘Dubai World Central’ is underway that will be the world’s largest airport after its completion. The share of aviation industry in UAE’s GDP is 28%.

UAE has strategic maritime location at the strait of gulf. The country is using this strategic advantage to its full potential with the construction of several ports like Dubai port, Khor Fakkan, Fujairah and world’s largest man-made harbor, the port of Jebel Ali. These ports allowed UAE to bypass Strait of Hormuz and provide direct access to the Indian Ocean.

UAE provides best business opportunists for foreign investors among all the GCC countries and they provide such opportunities especially through free zones and offshore areas. Free economic zones are present in specific areas in all the 7 states of UAE where foreign investors are provided with 100% business shares along with exemption from duties and taxes.

Real estate business is growing rapidly in UAE since past few decades. World’s tallest building, Burj Khalifa, is an example of the progress made in the real estate sector. This sector is not only providing job opportunities for local and foreign population but they also enhance tourism for country as people from all around the world like to visit the beautiful and unique places constructed in UAE. Few of the examples of these exciting and unique places are Saadiyat Island and Yas Island in Abu Dhabi, the World Island, The Palm Island and Dubai Miracle Garden (world’s largest natural flower garden) in Dubai and Falcon Island in Ras Al Khaimah. All these developed and under constructed projects are surely going to boost tourism in the whole of UAE.