You are here:
BusinessGeneral 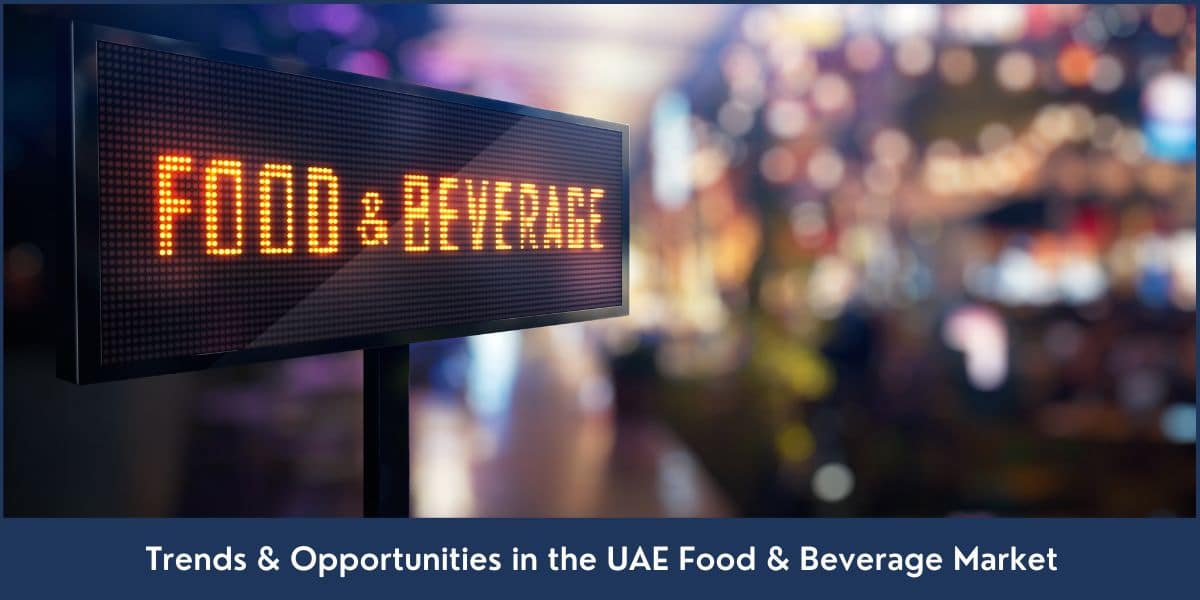 Due to the expanding number of visitors, the United Arab Emirates continues to lead in food and beverage sales in the Middle East. The country and Dubai continue to attract a variety of global and domestic food items and beverages. The UAE’s second-largest industry, food, and beverage is a vital part of the country’s economy as well as the region’s large-scale economic diversification and rise.

Despite tough competition in the F&B sector, Dubai Expo 2020 and other worldwide events in the country provide reasons for optimism as the country continues to thrive as a tourist destination and open new tourism spots across the Emirate.

Why the UAE Food and Beverage Industry Continues to Grow

The F&B sector in the UAE is fiercely competitive, because of its enlighted customers. It is important to make difficult decisions for F&B companies such as launching intriguing brands that didn’t thrive in specific regions, eliminating underperforming stores despite the fact that they were desperately required, etc.

On the other hand, the line of restaurants has made significant advancements in a number of areas during the last few years. Experts believe if you are thinking of opening a restaurant in Dubai too, it will prove to be an extremely lucrative idea. But you need to look at the company from all angles, from organizational agility to market relevance, to promote efficiency and results-driven financial monitoring to make it successful.

The UAE’s food and beverage industry has remained above the fray of shifting oil prices and geopolitical upheavals, thanks to ongoing government spending on domestic construction and development projects. The UAE food and beverage sector has expanded by 22% in the last five years, from $10.8 billion in 2013 to $13.2 billion in 2018. Economists believe that it will continue to grow in the near future.

Abu Dhabi’s Vision 2030 and Dubai 2020 Expo diversification initiatives are encouraging inventors to utilize their money in the Emirates. Dubai has begun a number of development projects in preparation for the six-month World Expo, including a new airport, malls, a world-record-breaking tower, hotels, neighborhood extension projects, sports, tourism, theme parks, and other attractions.

With the recently opened Louver Abu Dhabi, a new airport terminal, and ongoing real estate and neighborhood growth initiatives, Abu Dhabi is trying to strengthen its position as the UAE’s cultural capital.

It’s not the first time that events like the World Expo have been used to kickstart long-term economic development. For example, after the Great Fire of 1891 devastated much of the city, Chicago used the World’s Fair in 1893 to rebuild. Each new location slated to open in the country offers restaurateurs a unique opportunity to develop or break into the market.

The UAE hospitality industry’s future, however, is not completely dependent on the old informal saying that ” they will surely come if you build it.” Other major aspects also play their parts, such as population increase and higher GDP per capita, which will most likely fuel restaurant demand.

High temperatures in the UAE and the wider GCC, combined with a more traditionally conservative population, have made indoor, family-friendly venues such as malls quite more popular than they were before. Increased foot traffic to such places is expected to increase as GDP per capita and predicted population growth continue to rise in the next few years. According to a study, 87% of shoppers visiting Abu Dhabi mall stop by a café or restaurant while shopping.

Because of its rising population and per capita wealth, the UAE has seen a surge in food and beverage items. Freshly brewed coffee, halal meat, and green tea are just a few examples of products with great potential in a variety of categories, including coffee, fruits, cereals, and vegetables. There is also a possible business opportunity in the niche of the organic food industry for people out there.

In the past few years, the UAE’s food processing industry has gone through a period of rapid growth. As a result of foreign investment and government initiatives to boost domestic food production and self-sufficiency, production facilities have begun to appear and diversify, and this trend is projected to continue.

Dairy consumption per capita is considerable, at roughly 80-85 kilograms per year. This lucrative industry is highly competitive and vibrant, with a large number of dairies in operation.

The growth potential in value-added milk products like yogurt, butter, and cheese is remarkably high.

The UAE’s food services business has grown to become a substantial industry, with over 16,000 outlets and shopping malls. The country has a diversified population and a demand for a variety of brands. So, there is huge potential in this sector.

Food and Beverage Business in UAE

Entrepreneurs are often seen going for one of the following categories:

No matter how big or small a food company is, it plays a crucial role at every step. Restaurants in Dubai are an important business option for entrepreneurs. You must document your dealings with processed foods if you wish to do so. Before diving into detail about how to establish a food and beverage business, there are a few things you should be aware of.

The UAE provides a large base for business owners in the food and beverage industry, allowing them to prosper. Dealing with the integration process can be risky at first. Owners, investors, and entrepreneurs seek the advice of business consultants such as Riz and Mona who are experienced in dealing with such issues during the startup process. Feel free to get in touch with us anytime.