100% Foreign Ownership Permitted in the UAE 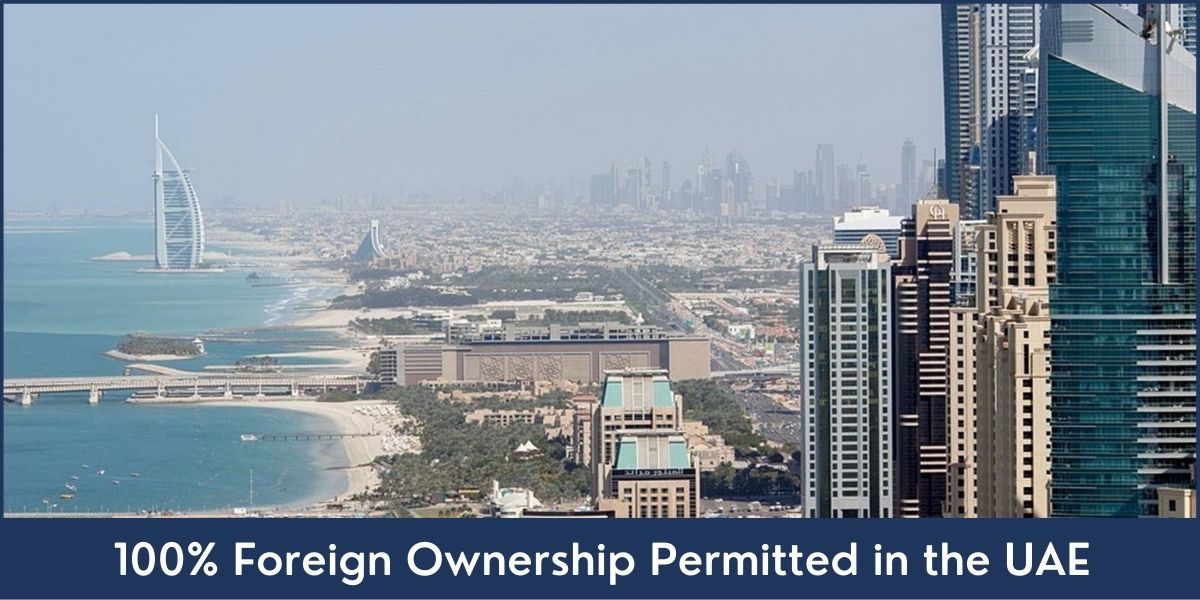 It is promising to know about the latest measures the UAE is taking for the sustainable long-term development of the country and its people amid fears of a global economic slowdown. In recent months, the UAE has implemented long-term residence regulations for foreigners and high-income ex-pats, new rules for accelerating payments for small and medium-sized enterprises (SMEs), signed Memoranda of Understanding (MoUs) to promote trade, and introduced a passporting regime for domestic funds to help start-ups. As of December 1, some business license groups would no longer need Emiratis as sponsors with 51 percent shareholding rights under the new FDI system.

The Sharjah Economic Development Department (SEDD) announced on 2nd June 2021 that it will be implementing a full 100% foreign ownership policy in the UAE from the day onward. The SEDD, regarding this matter, said:

This decision includes no requirements such as a specific capital or any additional fees for foreign investors, while allowing branches of foreign companies to conduct their business in the Emirate without the need for an agent of a foreign company. These efforts aim to encourage investment in Sharjah, attract more new international investors, and contribute to revitalising the local economy and driving economic development, to enhance the Emirate’s position on the local and global investment map.

The Commercial Enterprises Law of the UAE specifies that UAE citizens hold at least 51 percent of the share capital of every business organized in the UAE (other than under the laws and regulations of its free zones) (or entities that are wholly owned by UAE nationals). Many foreign investors have regarded the need to conform with local ownership criteria as an inconvenient aspect of the UAE’s legal framework, leading either to overly complicated ownership arrangements or, in the most serious situations, to a decreased desire to spend substantial resources.

The FDI Act does not serve as an elaborate, stand-alone policy proposal or remove the local ownership conditions in their entirety; however, it establishes a mechanism for increasing the proportion of the share capital of a corporation that is allowed to be controlled by non-UAE nationals by the implementation of subsequent UAE Federal Cabinet decisions and regulations enacted by the governments of the region.

The President, His Highness Sheikh Khalifa bin Zayed Al Nahyan, endorsed the long-anticipated and highly debated Foreign Direct Investment Legislation that will have a game-changing impact on the nation’s investment environment.

The statute permits international control of “onshore” or mainland companies, as it is in effect. Just 49 percent of foreign ownership was permitted under conventional legislation. Only in free zones or while starting up a professional services firm was 100 percent foreign ownership allowed. As per Cabinet Resolution No. 16 of 2020 on the determination of “The Positive List,” the long-awaited 100 percent foreign investment of corporations is now permissible in the UAE.

The UAE is rightfully seen as the path and more so now to overseas market prospects. The nation is renowned for its pro-business ethos and favorable international investment infrastructure. The healthy political climate of the world renders it highly attractive for investment as well. The additional incentives include, among others, zero corporation taxation on taxable gains and a full income tax exemption. The latest reform, which will support the UAE economy and international investors alike, now provides limitless possibilities.

The Law on Foreign Direct Investment (FDI) provided for the establishment of a Committee on Foreign Direct Investment (CFDI) which was entrusted, among others, with the submission to the Cabinet of an initial list of operations and sectors in which expanded 100% foreign ownership in UAE could be allowed. This list of qualifying industries and economic operations, regarded as the positive list, has now been approved by the Cabinet.

The positive list actually points out 122 commercial activities carried out in relation to 13 sectors of business. It is obvious that the selection of sectors has been made on the basis of the confidence of the UAE government of those sectors which it believes would benefit the most from higher levels of foreign investment and which are capable of serving as long-term drivers of sustainable economic development.

The following are the commercial industries listed on the positive list:

The FDI Legislation states that the easing of foreign investment constraints is not general, but may refer to particular industries and to a small range of business operations in those sectors. As such, the negative list is laid out in the FDI Law which provides that the permissible amount of foreign investment in companies allowed to trade in certain sectors would not be raised above the level currently permitted.

The industries that are a part of the negative list include:

It should be noted that the power of the Federal Cabinet is to include and exclude practices and sectors from the negative list, albeit on the grounds that the sectors listed in the negative list are mainly those which are perceived to be highly vulnerable.

The Department of Economic Development (DED) in Ajman also unveiled their decision to open free ownership of economic activities in not only the commercial but also the industrial sectors to foreign owners for complete ownership. This decision was taken to further enhance the investment opportunities and lure the investors to a sustainable economic future which is based in UAE. The DED has approved over 1,000 economic activities which are open to complete ownership from foreign investors.

Sheikh Ahmed bin Humaid Al Nuaimi, Representative of the Ruler of Ajman for Administrative and Financial Affairs and Chairman of the Ajman DED said:

“This initiative will contribute to facilitating doing business and increasing the attraction of foreign direct investment to various vital sectors in the emirate of Ajman that will continuously promote such developments and decisions and support economic diversification and sustainable development. We will always strive to provide the appropriate investment environment for investors.”

He further added that “In line with its relentless quest to develop and improve the investment environment, the department periodically reviews, in cooperation with its strategic partners, the incentives and facilities granted to investors, and constantly communicates with the business community to provide quality and competitive services.”

In view of the current economic impact of the Covid-19 crisis, the adoption of the 2020 FDI Act is a welcome move for new and existing investors and strengthens the appeal of the UAE as a regional investment hub. We are sure that this move will reinforce the growth of the UAE to reach new heights. For many entrepreneurs in the UAE, 100% foreign ownership has been a concern and being one of the first to offer this, the UAE will instill confidence in the broader community to pursue a more sustainable economic future.