Working in Dubai as an American 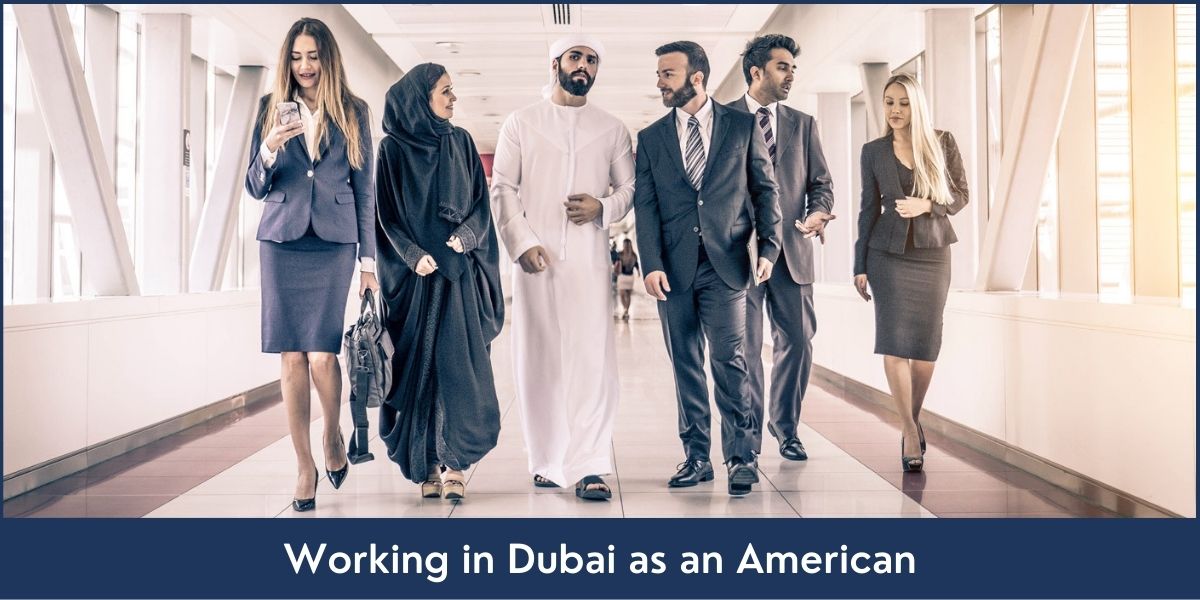 Are you looking to move to Dubai as an American? If yes, then you have come to the right place because Rizmona has compiled a detailed guide to help you throughout the process.

According to the latest data available, there are currently more than 40,000 US citizens living in the emirates. Majority of these American expats, which also make up one of the largest expat communities, live in Dubai. Rest of the 10,000 or so are located elsewhere which includes Abu Dhabi as well.

This article will guide you throughout the process and prepare you for things you need to do, documents you need to provide, and the overall experience for the US citizens in Dubai.

Working in Dubai as an American

Expats from the United States are welcome to work in Dubai, provided they fulfill and have the accurate visa and are employed during the duration of their said visa. Exceptions are when you’re permitted in the country on a spouse visa. Construction and real estate, tourism and hospitality, technology, and finance sectors are flourishing in Dubai with new and attractive opportunities.

Employment opportunities in Dubai are extremely attractive which consequently makes the job market immensely competitive. The method to seek and apply for the job you’re interested in is quite similar to what you are accustomed to.

On average a person earns AED 16,775 per month in Dubai, this is roughly 4570 in Dollars. Which is attractively higher than the average salary in the United States of 3900$ per month. Having that said, All the hotels, tourist resorts, and luxurious lifestyles in Dubai make it an expensive city to live in but nothing compared to the cost of living in cities like New York and London.

The UAE is one of a few Gulf States with no income tax others include Qatar, Kuwait, and Oman. In addition, the UAE does not impose any withholding tax or cooperate income tax, for most business types. However, you will probably have to taxes back home in the United States of America. Expanding on that further, if you’re an American resident earning income in Dubai including your earnings for renting out your private assets, you’ll have disclosed n pay taxes on your income back in the States. You can find more detailed information through Internal Revenue Services (IRS) and US Embassy.

The UAE is welcoming to foreign investments and expats who wish to relocate and take advantage of high-paying employment opportunities. However, Dubai residents are exposed to Value Added Tax, similar to United States income tax, plus the government charges fees for utilities and other services they provide.

Education is of great importance for every parent and a major vital factor when you’re deciding to relocate to a new location. So, if you’re a parent and relocating to Dubai for work, you’ll want to be informed about the quality of education Dubai has to offer. Both private and public education is assessable in Dubai, with private education being the dominant one with 90%. UAE offers free and compulsory education in public schools for Emirati boys and girls from age 5-15. From 2001 onwards expat children have been able to attend public schools in Dubai.

Various schools have a rolling admission system, this makes the entire admission process convenient as they can apply for admissions any time of the academic year instead of following a hard deadline. School fees varies between AED 12,723 to AED 64,093 ($3,463-17,449) approximately.

In America, the traditional working days are from Monday to Friday but they are different in Dubai, Sunday to Thursday. Majority of schools follow a business week schedule and are open from Sunday to Thursday, active hours of the school depend on the school itself. The Arabic language is compulsory for students who are not of native Arabic and have to learn it till 9 grade (age 13).

Dubai authorities take traffic laws very seriously to ensure the safety of their citizens. So, it is of extreme importance to know and understand Dubai’s traffic rules and regulations so you don’t end up breaking them and put your or someone else life at risk. Dubai practices right-hand traffic. You will need to adapt to intensely high-speed limits of new high ways, Abu Dhabi-Al Ain and Shiekh Khalifa highways meeting up to a speed limit of 160km/h (99mph).

Although, the newer highways set an all-time high-speed rate of 160km/h other highways in emirates, such as Shiekh Mohammed Bin Zayed Road and Emirates Road limited its speed rate to 110km/h.

Driving under the influence of alcohol or any intoxicating substance is a serious crime in UAE. This is because the drugs affect your judgment, coordination, and ability to drive. So, If you don’t want to see yourself ending up in prison you should definitely respect UAE’s zero-tolerance policy regarding drunk driving.

ALSO READ  Complete Guide: Living in Dubai as an Expat

Is Dubai Safe for Americans to Live in?

Crime is something that no country in the entire has world has been able to eradicate. However, authorities always focus on reducing the number of such incidents to guarantee the safety of its citizens.

Dubai is established as a safe city for foreigners including Americans. Even though UAE doesn’t publicize its criminal data, the crime rates are extremely low, especially the ones violent in nature. However, similar to other enormous cities petty crimes are typical but the authorities take serious actions to address them. There are some publicly available guidelines that people should follow for generic crimes that place in isolations such as sexual harassment, pickpocketing, and scams. The authorities intently monitor and administrate attractive sites such as malls, airports, hotels, and resorts, which assists to control crimes activities.

Living in Dubai as an American woman

Western Women should expect and be prepared for a huge cultural shift when moving to Dubai. Women in Dubai are expected to dressed modestly and are prohibited to wear revealing clothes. They should cover their thighs, shoulders, and midriff with proper clothing when they are out in public.

The city offers a lot of features and services to facilitate women and children. Including, women taxis drivers, women and children-only carriages in metro trains, women-only queue stations at government and regulatory office buildings.

Every country has its own laws, rules, and regulations, reflecting its societal and cultural norms. UAE is no different. Westerners moving to Dubai will have to be receptive to its culture, as various Western norms are disapproved and, in some cases, criminalized. Before moving to Dubai it’s extremely important for your own well-being to be informed about things that are against the law.

Here’s a list of activities that are against the law in Dubai:

What to Prepare For

Uprooting your entire life and moving to not only a different city but also a different continent is a huge decision and you need to weigh the pros and cons before finalizing the decision.

If you have decided to move to Dubai as a US citizen then here are a number of things you need to prepare yourself for.

As a US resident moving to Dubai, you will need a residence visa and a work permit; these are the things that are required after your initial 30-day entry permit expires. If you are planning to move and stay in Dubai for a period of longer than 30 days then you need to have your visa processed beforehand. Otherwise, the visas are available on arrival and you can then return within 30 days without making any prearrangements for your travel. Living in the UAE requires a work visa and it implies that your employer will have to sponsor you to live in the city. In these particular cases, the visa is subject to the length of the contract employment.

If you are planning to have your visa processed while you are in Dubai then that’s only possible one way; you will need to apply for a tourist visa, come to Dubai, and then transfer to a work permit and a residence visa. You can look for a job in the meanwhile, or start a business or become a partner in any company with at least 25% shares allocated in your name.

Another legal way of moving to Dubai is through your spouse. This means that you will need to have a spouse present in Dubai who is already employed. This way, they can sponsor you to come and live in Dubai.

Finding an accommodation used to be a very tricky task before as it was illegal to live with the opposite gender if both were not close family relatives or if they were not married. However, this rule was recently lifted which was to accommodate a number of US expats along with other foreigners. This decision had a very positive impact and it did see a sudden growth when it came to people applying for Dubai as expats.

You can find decent apartments, villas, or even separate houses to live in. Dubai has a variety of accommodations and it caters to a wide range of people. However, one thing to note is that the accommodation in Dubai is relatively expensive and you often need to pay the money upfront (whatever the payment amounts up to for an entire year based on the basic rent of the place).

The United Arab Emirates has a very strict drug policy and this is exactly why it is very important to know which drugs are permissible and which aren’t. There is any US medication that might be legal in the country but remains illegal in Dubai.

When it comes to prescribed medication, you will need to have prior approval from the UAE’s Ministry of Health. You will need to show that approval to the authorities and only then will you be allowed to enter UAE with the medication. It is a crucial thing because there are legal proceedings involved otherwise, which can become very tedious to deal with.

This wraps up Rizmona’s guide for Americans as to what they can expect if or when they finally decide to move to Dubai. It is not only a wonderful place to live but due to the business development, the working culture has also improved drastically in recent times. Feel free to contact us for more information or help required throughout this process.