VAT To Be Imposed On Few UAE Private Universities 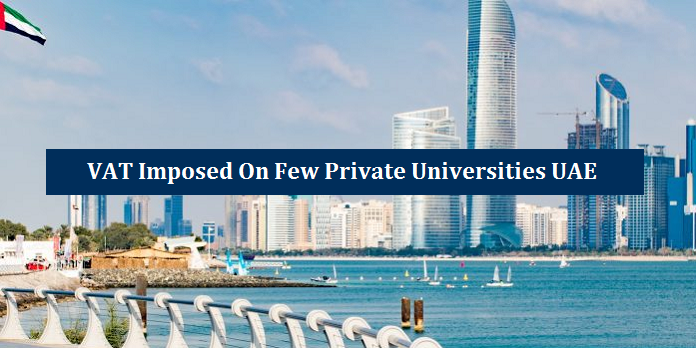 Just one month is now left in the implementation of value added tax (VAT) in UAE but the things aren’t completely cleared yet. There are still several speculations going on about the products and services that will come under the previously announced and soon to be implemented tax even after the signing of the VAT executive regulation by UAE PM and vice president and Dubai’s ruler, Sheikh Mohammad bin Rashid Al Maktoum, few days ago. Previously, it was considered that educational institutes will be exempted from VAT but now it is found that not all institutes will be able to avail this advantage.

According to details, all the public and private schools will get zero-rated from VAT after which there will be no increase in tuition fee of these schools. This news provides relief to parents who were worried about the educational expenses of their children. But not all students are so lucky. The order also mentions that only those private universities will remain free from VAT that receives more than 50% funding from government. Therefore, if a private university in UAE is getting 50% or less funding from government then it will subject to the standard rate of 5% VAT.

Due to the presence of large number of foreign citizens, there are several private universities in UAE (especially in the emirates of Dubai and Abu Dhabi) and many among these will be affected after this latest order. Many of these are international universities that attract large number of students not only from the whole MENA (Middle East & North Africa) region but also from other parts of the world. This new order will affect education expenses for several local and foreign students but the rate of VAT is moderate and it will not impact much on the number of students in these universities.

Value Added Tax (VAT) will be implemented in UAE and Saudi Arabia from 1st of January 2018 while other countries in GCC are also expected to implement this tax later in the year 2018.