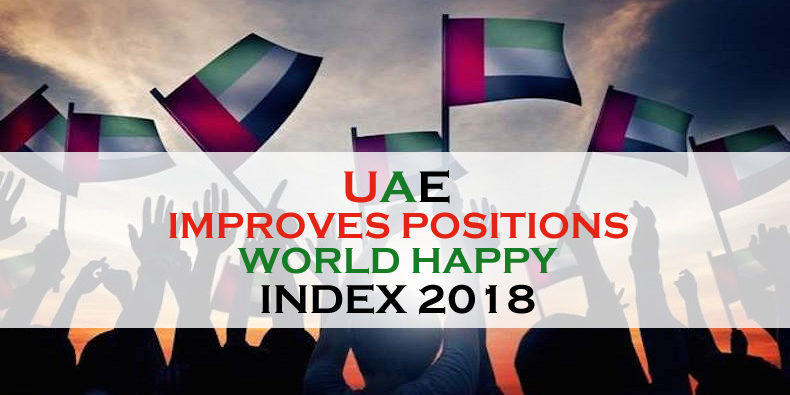 Different reports and indexes by reliable international organizations have approved the improvement of business opportunities and overall wellbeing of the people of UAE in recent past. Now it is also known through a latest report that the people (both citizens and expats) in UAE are one of the happiest residents in the world while the country has also improved its position from last year.

The annual World Happiness Report 2018 is published by the UN Sustainable Development Solutions Network and the Earth Institute at Columbia University. The report puts UAE at the 20th spot which is 1 position ahead as compared to its position last year. The country also maintains its positions as the happiest country in the Arab world and its adjacent areas. UAE is in fact the 2nd happiest country in the Asian continent after Israel.

Finland is at the top of the list while the initial 10 positions are secured by developed nations of Western Europe (especially Scandinavia), North America and Oceania. Total 160 countries were taken in account for the formation of this report. The report is based on more than 100 indicators that also include several new indicators for measurement of happiness among expat population in various countries as expatriate population is increasing in several countries for certain reasons.

UAE has performed better than its overall score in this latest indicator as the country is ranked 19th among the happiest expat population. In this factor, the Gulf nation is ahead of countries with high expat population like Singapore, the UK, France, Belgium and Germany.

The country performed best in 6 indicators where it achieved 1st spot on global level. These include: full time employed population, satisfaction for environmental preservation, health level of population, cities easily adopting expat population, availability of mobile phones to public and satisfaction with roads and highways. UAE achieved 2nd spot in indicators of getting quality healthcare and good and respected treatment of children.

The importance given by the government of UAE for happiness of its citizens and residents is evident from the fact that it has setup a separate ministry for happiness and wellbeing of its people. The UAE’s Minister of State for Happiness & Wellbeing, Ohoud bint Khalfan Al Roumi, expressed her pleasure for achieving this milestone of entering the top 20 list of happiest countries in the world. She said that it is due to the forward-thinking vision of the country.

This achievement of UAE and its performance in several important indicators reveal that the country is one of the world’s best places for foreigners to live and work here. It is due to the lucrative opportunities provided by the UAE government to foreign investors, job seekers, residents and visitors. If you want to take advantage of these business and residence facilities in one of the happiest countries in the world, then we at Riz & Mona Consultancy can assist you in getting trade license, residence visa, etc. in any emirate of UAE. You can contact us via our WhatsApp # 971-56-9971225.