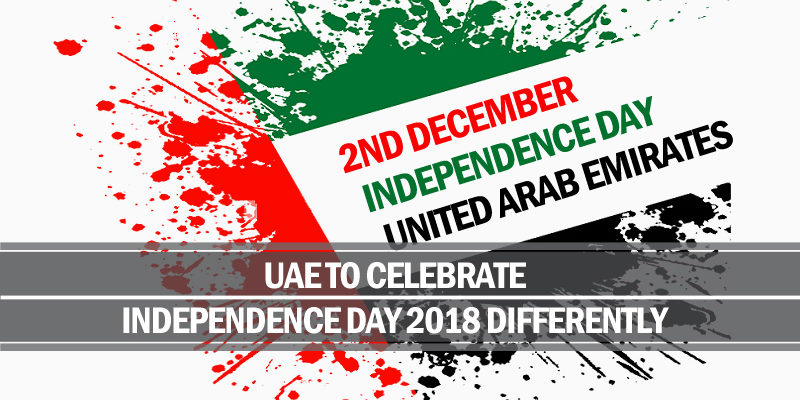 Independence Day is the most important day for any country. Nations celebrate this day with special events to commemorate efforts and sacrifices of their forefathers in order to inculcate national unity and love of the land among its citizens. The same thing happens in UAE as well. Every year, 2nd of December is celebrated as Independence Day. On that day in 1971, UAE achieved independence from UK with the unification of 6 of the 7 emirates (Ras Al Khaimah joined later in February 1972). This day is marked by public holiday and special events in order to remember those efforts that their forefathers and leaders took for independence and progress of the country.

This year, the nation is celebrating this national day with same fervor and enthusiasm, but there is something different and special also that will happen this time. We are well aware that UAE is just a barren desert that was relying mostly on oil and some trading activities for its economy before independence. But the situation changed completely after independence. Now, UAE is known as one of the world’s most prosperous countries where people from all over the world want to live for business activities, employment and better living standard.

It is mainly due to wise policies adopted by leaders of the country that took UAE on such high level. As compared to most of others countries of GCC, UAE was quick to adopt diversified economy where tourism and business incentives also played important role in financial growth of the country. All famous multinational firms and institutes have their presence in UAE due to various benefits they avail here.

These important steps assisted in rapid and vast growth of UAE’s economy that has risen to 231 times at 1.45 trillion AED in 2013 as compared to that of 1971 (year of its independence). UAE has the most diversified economy in GCC which is evident from the fact that its non-oil trade has grown to AED 1.2 trillion in 2012.

Previously, only the emirate of Dubai had diversified economy. But now all emirates of UAE are trying to convert their economy from oil-based to knowledge-based after global oil crisis of 2014. UAE has more than 80% expats as residents while it is enjoying one of the world’s highest HDI (human development index). It is also one of the most favored destinations for tourists in Arab region.

These are really great achievements that UAE gained in less than 50 years of its independence. On viewing this, the government has decided to celebrate this year’s Independence Day slightly differently. Previously, important personalities and their efforts were remembered on this important day. But this time, government of UAE has announced to “celebrate achievements” on this special day instead of personalities. According to announcement by government, they will remember and celebrate different projects of UAE that they achieved on economic, social, cultural and scientific level. Another major difference for this year’s celebration is the announcement of 2 holidays (2nd and 3rd December 2018) instead of usual single holiday.

It is an important step from country’s promotional point of view as well as this will attract foreign investors and specialists of various fields after getting information about achievements of the nation in past 47 years. This will ultimately result in arrival of more foreign investment, tourism and foreign expats in the country. We at Riz & Mona Consultancy congratulate all the citizens and residents of UAE on that important day for all of us.