Ramadan To Begin From May 17, Office Timings Announced 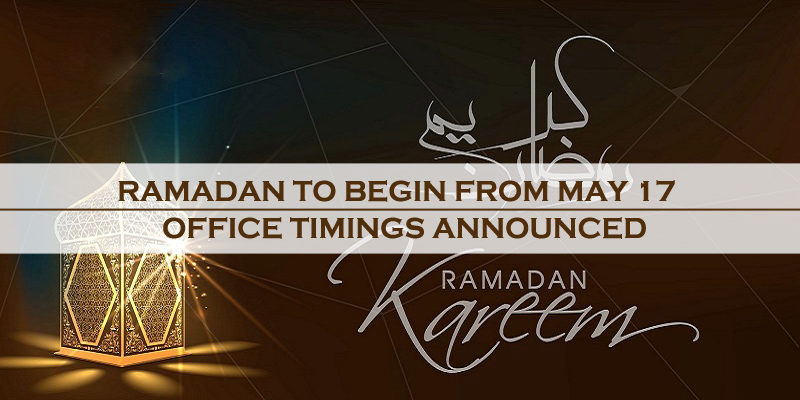 The Ramadan moon can’t be sighted on Tuesday 15th May 2018 after which it has been declared that the starting day of Ramadan 2018 in UAE is 17th May 2018. Like other Muslim countries, Ramadan plays a special role in the daily life of people and everything changes in that single month as compared to the rest of the year. The government has already announced several modifications in rules concerned to government and private employees along with various businesses.

The government has already announced office timings for schools and public offices. According to these announcements, the public offices will remain open from 9 am to 2 pm during the whole month. On the other hand, the Ramadan school timings for public schools in UAE have also been announced. These timings are different for different classes. The timings for private schools have also been reduced for the upcoming holy month. According to the recent announcement, the office timing for private sector in UAE has been reduced by 2 hours as compared to normal timings.

There are few general rules and regulations also on different types of businesses (especially those dealing with foodstuff) and they have been implemented this year as well. The malls will not be allowed to serve food, drink and smoking items in public but they are allowed to serve their non-Muslim customers behind partitions. Most of the malls in Dubai can remain open in daylight through their F&B options. Through this way, they can cater non-Muslim tourists and residents.

But it doesn’t mean Ramadan slows business activity in UAE (and other Muslim-majority countries). In fact, several types of businesses related to food & beverages industry boost during the month as people tend to make their fast special by eating variety of foods during iftaar and sahoor. Apart from that, several new businesses emerge in Ramadan and deliver products and services according to the new lifestyle of residents. Along with that, several existing businesses and companies also offer unique products and activities related to the Ramadan.

Therefore, Ramadan provides new and amazing opportunities for various businesses to present something new according to the change in the lifestyle of people. The month doesn’t impact negatively on businesses but in fact give every business a new shape. Several businesses enjoy better results in Ramadan by providing various incentives to residents and tourists in UAE.

Though, the new timings for public and private institutes in the country are meant to provide some facility to people. But it is expected that the reduction in working hours will not impact much due to increase in performance of the work force.
Source: Arabianbusiness